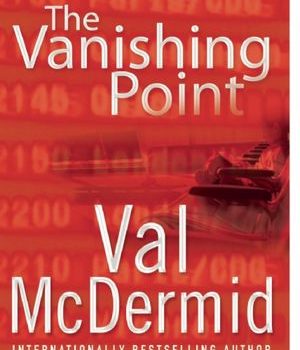 One of the finest crime writers we have, Val McDermid’s heart-stopping thrillers have won her international renown and a devoted following of readers worldwide. In The Vanishing Point, she kicks off a terrifying thriller with a nightmare scenario: a parent who loses her child in a bustling international airport.

Young Jimmy Higgins is snatched from an airport security checkpoint while his guardian watches helplessly from the glass inspection box. But this is no ordinary abduction, as Jimmy is no ordinary child. His mother was Scarlett, a reality TV star who, dying of cancer and alienated from her unreliable family, entrusted the boy to the person she believed best able to give him a happy, stable life: her ghost writer, Stephanie Harker. Assisting the FBI in their attempt to recover the missing boy, Stephanie reaches into the past to uncover the motive for the abduction. Has Jimmy been taken by his own relatives? Is Stephanie’s obsessive ex-lover trying to teach her a lesson? Has one of Scarlett’s stalkers come back to haunt them all?

A powerful, grippingly-plotted thriller that will keep readers on the edge of their seats until the end, The Vanishing Point showcases McDermid at the height of her talent.

There is a reason why Val McDermid is so widely respected for her books. The twists and turns of this one prove it.

Stephanie is a ghost writer who ends up with the job of writing the life story of reality star Scarlett Higgins. Unexpectedly, she forms a true friendship with Scarlett, and in the wake of Scarlett’s tragic death, finds herself the guardian of Scarlett’s only child, Jimmy. Until the day he is kidnapped. She hopes the answer to his disappearance can be found in their past.

When the story began, I was a bit skeptical. First, the beginning of the book is full of the worst stereotypes of both Americans and the TSA (not that I plan to defend the TSA much). Second, the thought of Stephanie telling her entire recent life story in the wake of Jimmy’s kidnapping is a bit far-fetched. But, as the book continued, I could suspend my disbelief in favor of it being an interesting bit of story construction. Because Stephanie’s, and Scarlett’s, story captured me completely.

Not that the book didn’t have some problems. For one, the thought of Stephanie going back to England three days after the kidnapping baffled me. I’m fairly certain that if my child (biological or not) were kidnapped while I was traveling in another country, you would have to forceably remove me to get me to leave. Also, Stephanie’s anonymity was suspect, especially for someone who was such a large part of Scarlett’s life. I did manage to guess part of the ending after the first red herring is dealt with, but the full extent of it was a complete surprise. I admired how far McDermid was willing to go.

So overall, I thought this was a very good read, if you can forgive the few parts that don’t quite hold together as well as they should.