Book #47 was Deviant Ways by Chris Mooney. The back of the book reads:

Punctuated with one blisteringly violent and unpredictable twist after another, this pitch-perfect study of psychological terror spotlights two magnificent minds opposed in a no-holds-barred duel of cunning and depravity.

A master killer calling himself the Sandman is out for revenge. He’s slaughtering not just one person at a time but whole families and whole neighborhoods, unleashing devastating explosions nationwide, and watching the horror unfold on a sophisticated network of surveillance cameras. No one knows why he is committing his crimes, or where he’ll strike next.

But one man — Jack Casey — knows this: the Sandman wants him in the middle of the case, and wants him to suffer…

Jack was the FBI’s top profiler until a psychopath’s unspeakable crime shattered his life. Now Jack is starting over as a detective in a posh shoreline community outside Boston, and involved with a beautiful woman who knows nothing about his shocking past. But the Sandman has found him, and his cutting-edge electronic devices are silently monitoring Jack’s every move. Knowing that a showdown is imminent, Jack turns in desperation to Malcolm Fletcher, a strange and brilliant fallen angel from the profiling unit. Fletcher is wanted by the FBI. And he possesses the key to unlocking the Sandman’s demented mind.

As Jack Casey confronts evidence that the evil he’s fighting may have emanated from his own side of the law, the Sandman’s motivations begin to appear and a wild chase ensues. But while racing against time to save the next family, Jack is led deeper into the dark and terrifying tunnels of his fragile mind — a place where the Sandman awaits, to deal his final master stroke of vindictive cruelty.

Deviant Ways is a breathtaking and unforgettable first novel that catapults Chris Mooney into suspense fiction’s highest ranks. A harrowing journey through ordinary streets turned into scenes of unimaginable terror, it careens from cries of mass murder to whispers within the mind — in a disturbing cat-and-mouse game of righteousness, loss, and vengeance.

This was merely average for me. Mooney didn’t make me particularly care about any of the characters or their welfare. I kept expecting a twist, like a mole who was helping the bad guy, but it never came. 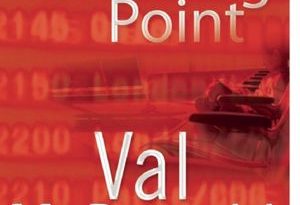