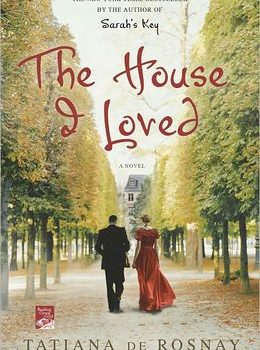 From Tatiana de Rosnay, the New York Times bestselling author of Sarah’s Key and A Secret Kept, comes The House I Loved, an absorbing new novel about one woman’s resistance during an époque that shook Paris to its very core

Paris, France: 1860s. Hundreds of houses are being razed, whole neighborhoods reduced to ashes. By order of Emperor Napoleon III, Baron Haussmann has set into motion a series of large-scale renovations that will permanently alter the face of old Paris, molding it into a “modern city.” The reforms will erase generations of history—and in the midst of the tumult, one woman will take a stand.

Rose Bazelet is determined to fight against the destruction of her family home until the very end. As others flee, she stakes her claim in the basement of the old house on rue Childebert, ignoring the sounds of change that come closer and closer each day. Attempting to overcome the loneliness of her daily life, she begins to write letters to Armand, her beloved late husband. And as she delves into the ritual of remembering, Rose is forced to come to terms with a secret that has been buried deep in her heart for thirty years.

My thoughts as I started this book: “Huh, I didn’t know Napoleon remodeled Paris in this way. This should be interesting!”

My thoughts as I finished this book: “Hmmm… well, that happened.”

I guess I was expecting more than I got from this story. What I wanted was a story of a woman fighting against progress to save her beloved home. What I got was a story of a woman repeating herself over and over, visiting one city official, and then refusing to leave her home. But not in a “chain herself to her front door” sort of way.

And Rose’s secret? Well, it’s blatantly telegraphed in the 3rd chapter, so nothing is a surprise. By the time Rose gets around to writing about it, all you can think is “yeah yeah yeah get on with it already!” And I had a very hard time buying her depth of feeling for her son, because she obviously didn’t care a lick about her daughter.

No one’s actions in this book really make any sense at all, and I think that’s what’s most frustrating. This could have been so much better.

I’ve heard great things about de Rosnay, even from others who have read this book and disliked it, so I’m sure I’ll read some of her other work. But if you skip over this one, you won’t be missing anything.