Sure, his IQ is off the charts, but that doesnâ€™t help much when youâ€™re growing up in the 1980s in a dreary New Jersey town where your bad reputation precedes you, the public school systemâ€™s written you off as a lost cause, and even your own family seems out to get you.

But itâ€™s not all bad. Raymond Chandler and Dashell Hammett have taught Huge everything he needs to know about being a hard-boiled detective . . . and heâ€™s just been hired to solve his first case.

What he doesnâ€™t realize is that his search for the truth will change everything for him.

First of all, I feel like this novel is a bit mis-characterized.  It didn’t feel like a YA novel to me (and I do read YA).  Instead, it felt like a coming-of-age story with a 12 year old protagonist that is written for adults.  Which is perfectly fine! Just not what I expected.

The tone of the novel was a *little* bit overdone.  Huge (Eugene) is very brash, very angry, and not quite as tough or mature as he thinks he is.  It took me a while to convince myself that his speech/actions/thoughts/etc were realistic, but since I am neither an extra-intelligent 12 year old boy, nor have I spoken with one in a few years, they’re probably not that far off.

Once you get past all that, what you have is a story about a kid who is lonely.  His sister won’t hang out with him anymore, his grandmother is becoming senile, his mom works all the time, and the few kids who used to be his friends are no longer allowed to associate with him, since he has a bit of an anger management problem.  His solace is found in his stuffed frog, Thrash (a pretty blatant symbolic manifestation of his suppressed rage) and in the classic noir detective novels that his grandmother thrust upon him during his 3 month suspension. Thanks to those novels, he is prone to finding mysteries in the mundane and making more out of situations than what is really there.  In the end, this story is about Huge finding his place, and realizing that life doesn’t have to be him against the world.

He really did grow on me, and one particular passage struck me as a perfect illustration of Huge.

"If I ever got out of this, I’d start a new, top-secret journal, which I’d keep in a booby-trapped safe, and I’d compile my own list of pointers or rules that other detectives never told you.  And my first rule would be: If you were going out to the woods in homemade ninja shorts after a day of hard rain, you *always* had to wear underwear, just in case you fell on your butt, because having to deal with swamp ass for the rest of the night totally sucked.  That was a solid first principle — Keep your ass dry — and I wish I’d thought of it earlier because it didn’t do me a damn bit of good now."

So if you like coming of age stories about brash, over-the-top, slightly damaged boys, don’t be afraid to pick up this book.  And keep your ass dry. 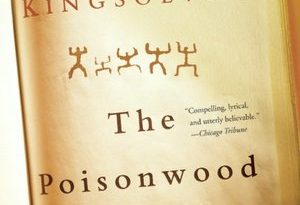