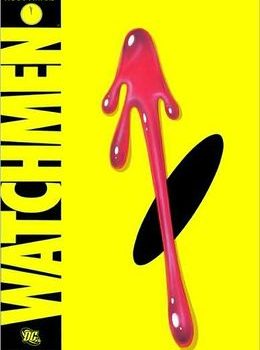 It all begins with the paranoid delusions of a half-insane hero called Rorschach. But is Rorschach really insane or has he in fact uncovered a plot to murder super-heroes and, even worse, millions of innocent civilians? On the run from the law, Rorschach reunites with his former teammates in a desperate attempt to save the world and their lives, but what they uncover will shock them to their very core and change the face of the planet! Following two generations of masked superheroes from the close of World War II to the icy shadow of the Cold War comes this groundbreaking comic story — the story of The Watchmen.

Who watches the Watchmen. Someone does. Someone who’s trying to kill them all, one by one. Time’s running out for the Watchmen…

This book has been on my to-read list since the movie came out (though I still haven’t watched the movie). Overall I enjoyed it, with a caveat or two.

The art style is very traditional, which I appreciated.  It did take some mental work for me to solidify myself in the correct time period, especially when so much is referenced back in the 60s. Actually, it was the back story that interested me the most – I enjoyed reading about how each superhero got to where he (or she) was. In fact, I liked those parts of the books much more than the overall plot. The main conflict in the book got a little too big for its britches, and ultimately didn’t hold together for me. By the time I got to the final resolution, I was just ready to be done.

Each graphic chapter of the novel is followed by something else – like a chapter from another book, a medical report, or a magazine article – that I guess is supposed to provide us with further back story. I liked these pieces at first, but after a while I realized that a good number of them didn’t do anything other than fill space. I outright skipped at least a couple.

When it comes down to it, I’m glad I read it, but more because of its place in history than anything else.

Leave a Reply to jenn aka the picky girl Cancel reply