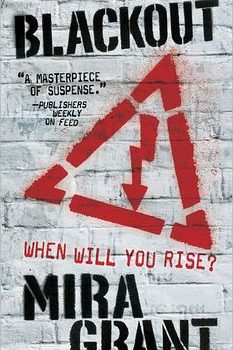 Rise up while you can. -Georgia Mason

The year was 2039. The world didn’t end when the zombies came, it just got worse. Georgia and Shaun Mason set out on the biggest story of their generation. The uncovered the biggest conspiracy since the Rising and realized that to tell the truth, sacrifices have to be made.

Now, the year is 2041, and the investigation that began with the election of President Ryman is much bigger than anyone had assumed. With too much left to do and not much time left to do it in, the surviving staff of After the End Times must face mad scientists, zombie bears, rogue government agencies-and if there’s one thing they know is true in post-zombie America, it’s this:

Things can always get worse.

BLACKOUT is the conclusion to the epic trilogy that began in the Hugo-nominated FEED and the sequel, DEADLINE.

If you haven’t read this series and plan to, you might want to skip this review. It’s impossible to talk about this third book without spoiling a major plot point.

I did enjoy having Georgia back, even if was only 97% her. I didn’t buy the science behind her cloning one bit.  I also found the way she and Shaun meet again to be more than a little coincidental. And don’t get me started on the EIS’s “plan”.

The problem with conspiracies is that they rarely make sense, and this one was no exception. I think it got a little too big and convoluted for the author to handle correctly.

BUT… What I’ve always liked about this series is the characters and the way they respond to adversity, and that still holds true in this book. I think it could have been a better story if the author had dropped the CDC conspiracy she created and instead made it a story where the world is confronted with the clone they’ve created. At least then, George’s return would have been necessary.

However this book turned out, whatever Mira Grant comes up with next will certainly be on my to-read list.