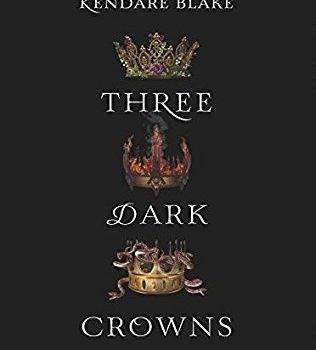 When kingdom come, there will be one.

In every generation on the island of Fennbirn, a set of triplets is born—three queens, all equal heirs to the crown and each possessor of a coveted magic. Mirabella is a fierce elemental, able to spark hungry flames or vicious storms at the snap of her fingers. Katharine is a poisoner, one who can ingest the deadliest poisons without so much as a stomachache. Arsinoe, a naturalist, is said to have the ability to bloom the reddest rose and control the fiercest of lions.

But becoming the Queen Crowned isn’t solely a matter of royal birth. Each sister has to fight for it. And it’s not just a game of win or lose…it’s life or death. The night the sisters turn sixteen, the battle begins.

The last queen standing gets the crown.


The premise of this book/series is rather dark. In this world, every Queen gives birth to female triplets. These triplets are sent to separate foster families in different areas of the kingdom to be raised and have their magical talents nurtured, never to see or interact with each other. And then on their 16th birthday, they will come together, meet some suitors, show off their magic, and then spend the next year (the Ascension) trying to kill each other. Last sister standing becomes Queen!

The first sister you meet is Katharine. She is a poisoner, and has spent her life being fed poison, building up her tolerance so that she can sit down to a meal and eat a variety of poisoned food without falling ill or, you know, dying. The family she is with is the most politically slick and sneaky, and evil (think “Borgias”). Arsinoe is supposed to be a naturalist, able to tame and control wild animals, but her gift has yet to show itself. She and her family are the most down-to-earth of the three, and she is the most resistant to participating in this ritual. Mirabella can control the elements, drawing thunder and lightning and wind to herself at her whim. She is the strongest of the three, and is under the thumb of the Temple, who are eager for her to win and return control of the kingdom to them.

Most of the book is spent in the lead-up to Beltane, their 16th birthday and the beginning of their Ascension year. You get to see the story from each sister’s point of view, as well as a few others. I enjoyed that, because it helps you connect to each of the sisters (and choose one to root for) instead of that decision being made for you by the author. There are a lot of political maneuverings and a few romantic plot lines to add to the preparations for the festival. Each sister has her struggles and her triumphs, and it’s obvious that the end of the book is just the beginning.

This is a story I really enjoyed, and I look forward to the other books in the series!